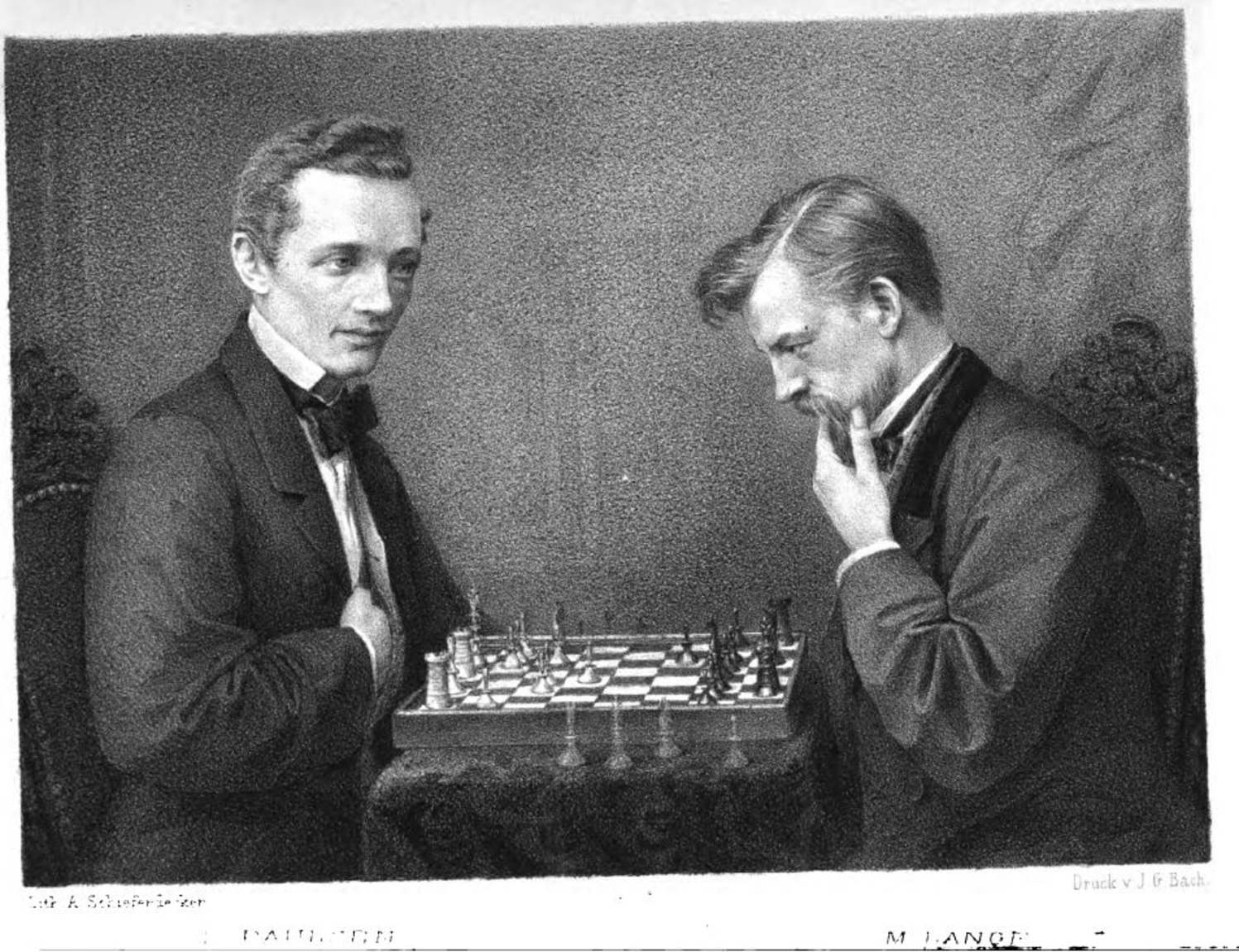 I’ll show you the fine romantic artistry from 3 lesser-known old masters, embodied in 3 great games. I’ll also give a cursory introduction of the players. Amos Burn learned chess in 1864 at the age of 15-16 and was coached by title holder Wilhelm Steinitz. He was the chief expert of the Burn variation of the French defense and replaced the notorious chess columnist Leopold Hoffer as editor of The Field. Burn once beat Alekhine in Karlsbad 1911 and his best exhibitions included sharing first at London 1887, first at Amsterdam 1889, and first at Cologne 1898. In any case, Amos Burn’s whole chess heritage has been celeberated in one move, in the accompanying game versus Edmond MacDonald. If you just want to see the position, you can skip to move 33. Truly beautiful stuff. It should be an immortal game and people should know more about Burn. Gustav Richard Ludwig Neumann was born in Gleiwitz (now Gliwice, Poland) in 1838 and died in Allenberg in 1881. During the late 1860s, he was among the five strongest players in the world. Neumann co-founded, with Adolf Anderssen, and edited the ‘Neue Berliner Schachzeitung’. In tournament play, he finished 1st at Dundee in 1867 and 3rd at Baden-Baden in 1870. In matches, Neumann defeated Simon Winawer (+3, =0, -0) with an impressive 3 win record against him in 1867. However, severe mental illness stopped him playing after 1872.”

In a mere 18 moves, he dismantles and shreds apart the great Zukertort. What a miniature! Max Lange is probably the most renowed player int this list. The Max Lange protection (1.e4 e5 2.Nc3 Nc6) is named after him. Not only that, he also constructed the first help-mate problem. He was first at Dusseldorf in 1862, 1863, and 1864, first at Hamburg 1868 and first at Aachen in 1868. In the database I’ve seen him beat Adolf Anderssen commonly. Presently Max Lange leads a romantic assault that closes with none of white’s queenside pieces created. His first sacrifice was unsound however it was incredibly hard to discredit. And we’ve come to the end of the article. I originally wanted to write a single article for each of the underrated masters but there wasn’t much pictures or historical bits I could get my hands on. Additionally, the romantic chess series would become too long and would lose it’s orignal brevity and quality.

Hope that you’ve learned something from this article. By reading my romantic chess series, you would have a good understanding of romantic chess and now fulfill your role in the chess community. Share this series with your chess friends and educate them about the beauty of chess.

← Prev: Ignatz Kolisch | Romantic Chess Part 4 Next: Why should The London System be played? →