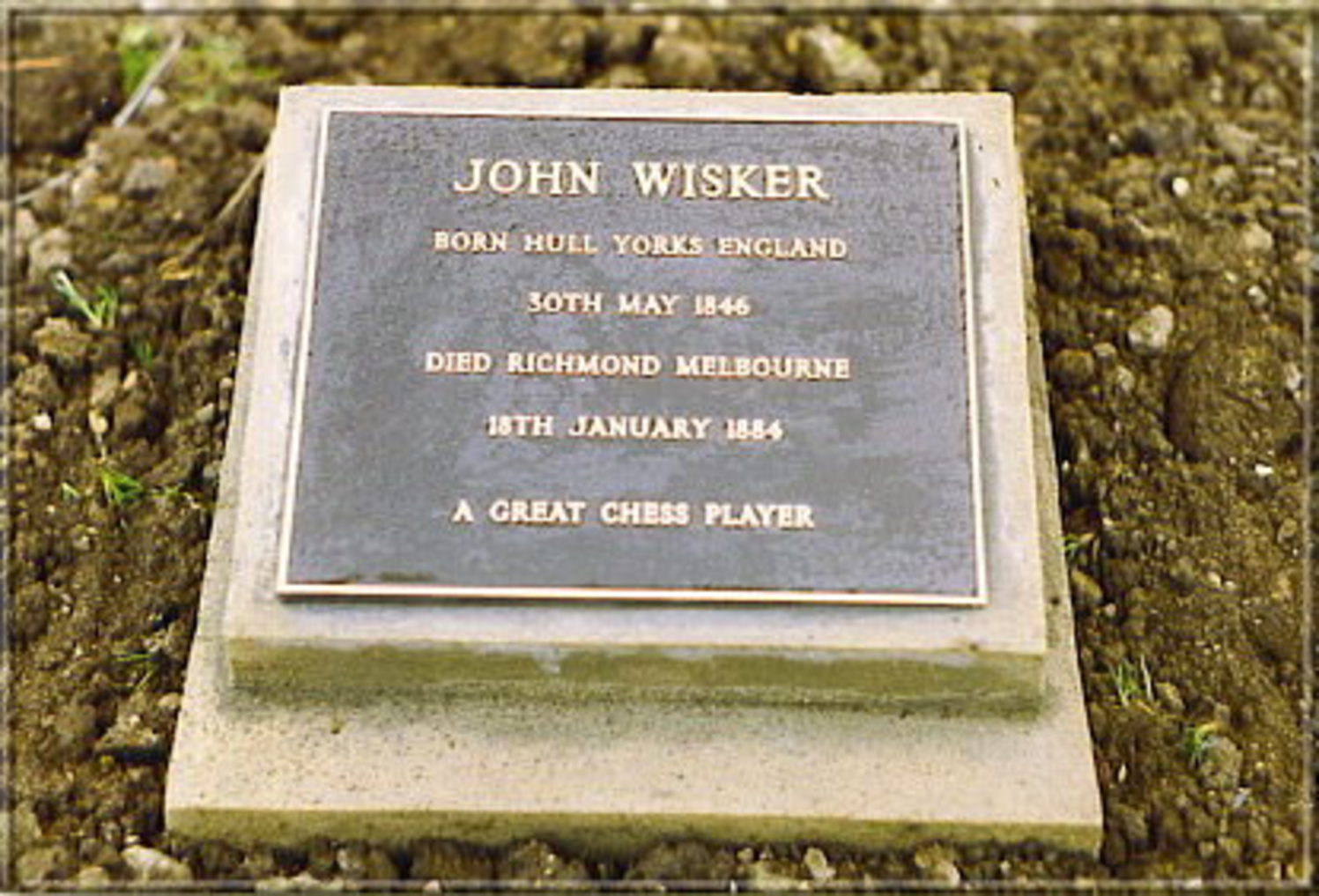 Today’s article will be a remembrance to a forgotten player. It is very sad to hear that people don’t even know who he is including me. So to improve my chess knowledge and raise awareness for such a strong player, I have written an extensive blog with many of his games.

John Wisker (30 May 1846 in Kingston upon Hull, England – 18 January 1884 in Richmond, Victoria) was an English chess player and journalist. By 1870, he was one of the world’s ten best chess players, and the second-best English-born player, behind only Joseph Henry Blackburne.

Wisker moved to London in 1866 to become a reporter for the City Press and befriended Howard Staunton. His proficiency at chess improved rapidly, and he won the 1870 British Chess Championship after a play-off against Amos Burn, ahead of Blackburne, the defending champion. He won again in 1872 after a play-off against the first British champion, Cecil Valentine De Vere. After this second victory, the British championship was not resumed until 1904. Wisker edited chess columns for The Sporting Times and Land and Water. From 1872 to 1876, Wisker was Secretary of the British Chess Association and co-editor of The Chess Player’s Chronicle. After learning that he had contracted tuberculosis, Wisker emigrated to Australia in the autumn of 1876 to try to regain his health. In Australia, he wrote a chess column for the Australasian. In 1884, Wisker died from bronchitis and tuberculosis.

To appreciate him and build a respect for him, let’s look at some of his game records and tournament standings.

There were five players in the London Oct 10, 1870, BCA-03.Challenge Cup: John Wisker, John Owen, Amos Burn, Valentine Green and Joseph Henry Blackburn. Blackburne and Green failed to score in the event, neither win nor draw. John Wisker and Amos burn won both respective games that day. John Wisker went on to win the BCA-03.Challenge Cup playoff, in a two game playoff with Amos Burn. I will not give you any other details I’ll be covering the game below.

But first, let’s take a look at a excellent game from the London Oct 10, 1870, BCA-03 Challenge Cup, in which John Wisker played against Joseph Henry Blackburne, who defended 1.e4 with a French Winawer, culminating in insanely brilliant piece maneuvers and Wisker lifting & utilizing his King, in a manner to make Lasker proud! The King-side piece swarm Wisker concocts against Blackburne King is utterly overwhelming! I was compelled to sneak a peek, as the quickest route to finale wasn’t immediately obvious yet Wisker mates in 10 after 44.Re7!

The Wisker and Burn play-off had two results. Wisker drew with Burn with the Black pieces in a Kings Gambit yet winning with the White pieces in a Ruy Lopez. In the winning game against Burn, John Wisker utilizes his King immensely, slashing through Burns defenses, down an exchange, as through hot butter! This game is incredibly instructive! The winning game occurred on Oct 29, 1870 and appears after the Blackburne, BCA-03 Challenge Cup game below.

Below is a Wisker win from the match series, in a fine King’s Gambit Accepted. Bird stoutly defended in the opening of the Cunningham Defense yet Wisker cleverly manages a queenside majority he effortlessly converted! Take a look at the game.

As we see, Henry Bird unfortunately made Wisker’s task of commuting his King to the easy aid of escort significantly less challenging with 41…bxc5?, rather than the more tenatious 41…Rb1 42.bxc6 Rb6, where the Black Rook can doggedly harass the passer or threaten the immediate 41…Rg3! 42.Kd4 c5+ 43Ke4 and a more lively Black Rook makes Wisker’s win more deserved. The rest was facile to a player of Wisker’s obvious caliber.

Let’s look at another game played between Wisker and Zukertort:-

A beautiful game by Wisker yet a lovely tactic, perhaps compelling Herr Zukertort’s resignation would have been: 28.Bh7+! Kxh7, 29.Qxf7 Rg8, 30.Re6 Rxg7, 31.Qf5+! Kh8, 37.Rxb6! However, Zukertort returned the favor with 29…Rd6? (after having committed the knight to e5), forcing the loss of a piece. Mr Wisker rightly jumps on the slight to his opponents back rank and pinned piece with 30.Rae1, where resignation could again have been a reasonable retort. After the continuation 31.Rxe5 Rxe5 (though Qxe5 is compelling, as well, …Bh7+ threatened and resignation rightly occurred), the lovely mate then follows: 32.Bh7+ Kxh7 33.g8=Q+ Rxg8 34.Qf7+ Kh8 35.Rxg8# would have elicited the same “checkmate” result Zukertort chose to evade earlier therefrom.

And let’s look at Wisker’s game against Bird in Round 4. They played the Bird variation of the Spanish game which is quite interesting.

I came across this in “Synopsis of Chess Openings” by William Cook. It is quite an interesting read:

“As the late Mr. John Wisker said in 1880: “The present generation of chess-players seem to have convinced themselves that serious games are NOT to be won by tripping up the adversary in the opening, but by sound calculation and judgment in the middle of the game, and accurate play at the end. We do not regret the change. It puts an end to gambit-mongering-to getting an opening by rote, and playing it off against an unwary adversary-and brings the functions of the chessplayer to their legitimate bearings. Chess under the congress system is likely to become more a matter of science, and less a thing of quips and cranks, than it has been heretofore. As to ‘lively chess’ we hold the opinion that the openings without sacrifices present abundant scope for brilliant combinations. It must be remembered, moreover, that five-sixths of the lively games recorded in print have arisen from weak moves by players innocent of great intricacies.”

Because of many messages that I’ve received in my inbox stating that, “There was an overflow of an chess games in the Cecil De Vere article” and “I found it boring”. I have tried to condense this article and went against my wish of including more games. However, if you are more interested, you can check out 77 games of John Wisker here (chessgames.com link).