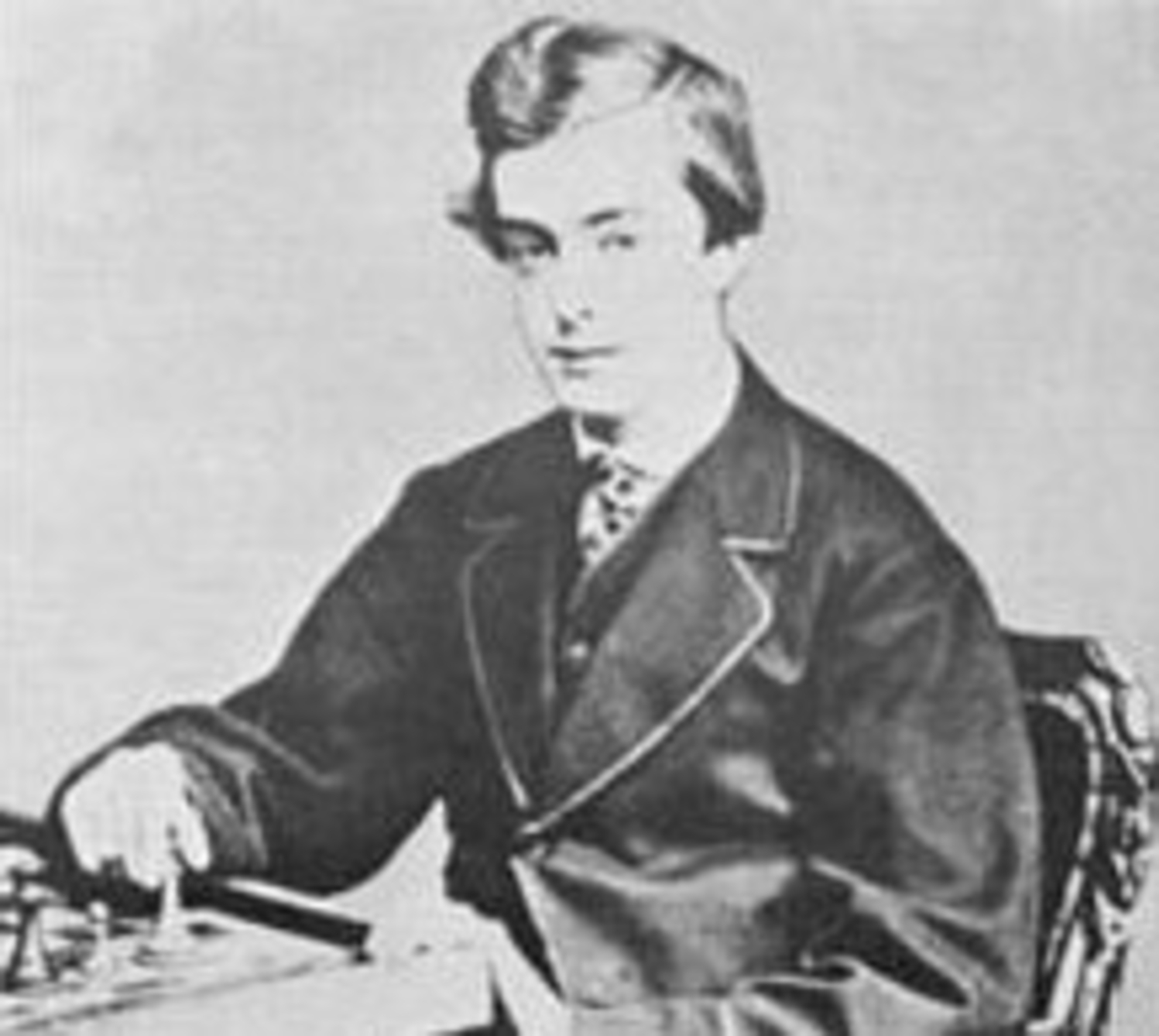 Today we will talk about an underrated player named Cecil De Vere. We will show his games and talk a little about his life. Cecil De Vere played chess effortlessly and elegantly without recourse to chess study or theory. His meteoric rise to fame and equally dramatic decline has been compared to Paul Morphy and he is often cited as ‘The English Morphy‘. If you don’t who Morphy was, take a look at this!

De Vere is an almost unique case in chess history. If you look at the historical ratings sites, his first rating is his highest. That is simply extraordinary. To emerge as a novice into the top ranks of the game is not unique, although most players I could name had developed quietly behind the scenes, playing strong opponents in informal games and matches within strong clubs.

However, with experience will normally come an increase in strength, and a rise in ratings. That is the true tragedy of De Vere. Had his life and personality have been different he would – in my opinion – have become one of the immortals of chess. He had a sublime talent. In some of the games I will give, he will make sacrifices, not following up with a series of hammer blows, but with simple looking quiet moves, against which his opponents are helpless. And he did it against the best – Steinitz, Zukertort, Blackburne, the mature Paulsen, Winawer, Bird etc.

Steinitz, shortly before he beat Andersenn to become ‘World Champion’ , played a match at odds of Pawn and move against a promising 20 year old , Cecil Valentine Brown, as he was then known. No doubts he was taking the opportunity to get in some practice in anticipation of the major test to come. Up to this point in his career we know of just 4 games played by the young man – this was before Potter entered into his journalistic efforts. For about 6 years he had appeared at the famous ‘Simpson’s Divan’ in The Strand (the same club where Zukertort died!) for a few hours on a Saturday afternoon. He would always try to play the strongest opponent available – which no doubt cost him many shillings – the normal stake requested by the professionals, such as Steinitz and Bird, at the time, and he would always accept ‘the appropriate odds’. In the Winter of 1862, he had contested, and won, a match with his friend, already established as a ‘Master‘, in the status term of the time, the Rev. G.A Macdonnell, at the odds of the exchange. However, he seems to have played little for the next 2 years.

In the first game, De Vere’s nerves showed, and Steinitz easily outplayed him in the complications. However, in the next 2 games, Steinitz was simply crushed by beautiful positional play on De Vere’s part. So, on to game 4. Steinitz decides to provoke complications again, and after his 25th move is threatening 26… Qxh2 check with a beautiful mate in 6.

A beautiful game by Cecil De Vere. The passed pawn was truly a criminal in this game. This is round 3 of the match and again Cecil demonstrates his creative genius. Look at it yourself! And within 2 years he had become the first British Champion by winning the inaugural event for the B.C.A. Challenge Cup. The event was not, despite value of the trophy – estimated at £50 – well supported. In the event, only De Vere, Bird, and MacDonnell of master strength entered. De Vere made a mockery of the whole event. Bird, MacDonnell and James Minchin – a name that crops up a lot in the chess of the time- all got the same treatment. Cecil De Vere had a record of 4 wins and zero losses. Let’s have a look at some of these games as well. What’s interesting about this game is that this is the Bird’s defense in the Ruy Lopez. And who’s playing with Cecil, that’s right Bird itself. Cecil beat Bird in his own ground. Amazing stuff!

In the next game, we see Cecil with a completely winning endgame. He is up a whole 2 pawns. How often do we see that in top-tier tournaments. In the below article, we see the way in which Cecil smashed the Philidor Defense against George Alcock MacDonnell. George resigned because it was truly too much for him to take on. See for yourself! This was one of the games played at the Redcar metting. Although in the end, Cecil has double passed pawns. His queenside majority was simply too much and he was up two pawns. Incredible indeed! A picture from the Redcar meeting

The following game was played in a small practice match by De Vere against his mentor Frank Burden, which he probably used as preparation for the great Paris tournament which followed soon after.

Another fabulous game. Just look at how much activity Cecil’s pieces have. In the following game, Cecil goes all out. He has an open h file for his rook with his light squared bishop eyeing down the kingside. A very strong attack. Amazing stuff indeed! And to end this article, I would like to show you a game annotated by Tartakower and Dumont. Let’s not forget Cecil’s opponent was the renowned Wilhelm Steinitz. This beautiful 28 move game is something everyone should remember, especially the bishop d2 sacrifice. It is not always the case that the most glamarous of games should be shown when introducing a chess player. What we should demonstrate is that chess player’s skill and command over this game. Here, we see Cecil facing the bull, Andolf Anderssen. He manages to convert a losing game to a draw with the excellent knight captures b4! Another positional masterpiece. I still wonder why Cecil is so underrated in the chess community.

What a game by Cecil. Almost teasing Bird and doing him dirty by allowing bird to capture his queen. And guess what, this is the bird’s defense variation in the Ruy Lopez. Just wow! Henry Bird; one of the rivals that Cecil absolutely crushes.

And we see Cecil facing Zukertort, one of the strongest players in that time. And look at Cecil’s attack, just unstoppable. Notice the last move rook captures h6. Too much craziness. Cecil De Vere contracted tuberculosis around 1867 and later became dependent on alcohol. He lived in London for most of his life but was sent to Torquay by his chess friends in 1874 in the vain hope of recuperation. He died in Torquay, UK, aged 28, and is buried there.

Unlike many, he did not have admirers ready to record and pass on his games. Indeed, many of his serious games have gone unrecorded. Many of his most beautiful accomplishments are lost forever.

P.S. Some people might be wondering why did I attach so many chess games. Number 1, he is such an underrated player (i don’t know how many times I’ve repeated that). I feel that people would be appreciate underrated players by seeing their creative genius and strengths over the board. Also, I was thinking to seperate this into different parts but people would just dismiss it as uninteresting or boring. I wanted a single page where you guys can bookmark and share it with your chess friends.

I hope that I’ve done justice to Cecil. it’s very sad to me because imagine (imagine!) you play really strong chess crushing strong players and then you get buried and lost in time. Insulting indeed. So please share this article with your friends and fulfill your role in the chess community. Also do let me know if you want articles in this format with many games or whether you want a condensed version.

← Prev: Taking a look at the Black Sheep Next: The Gastineau Garden Party 1873 →