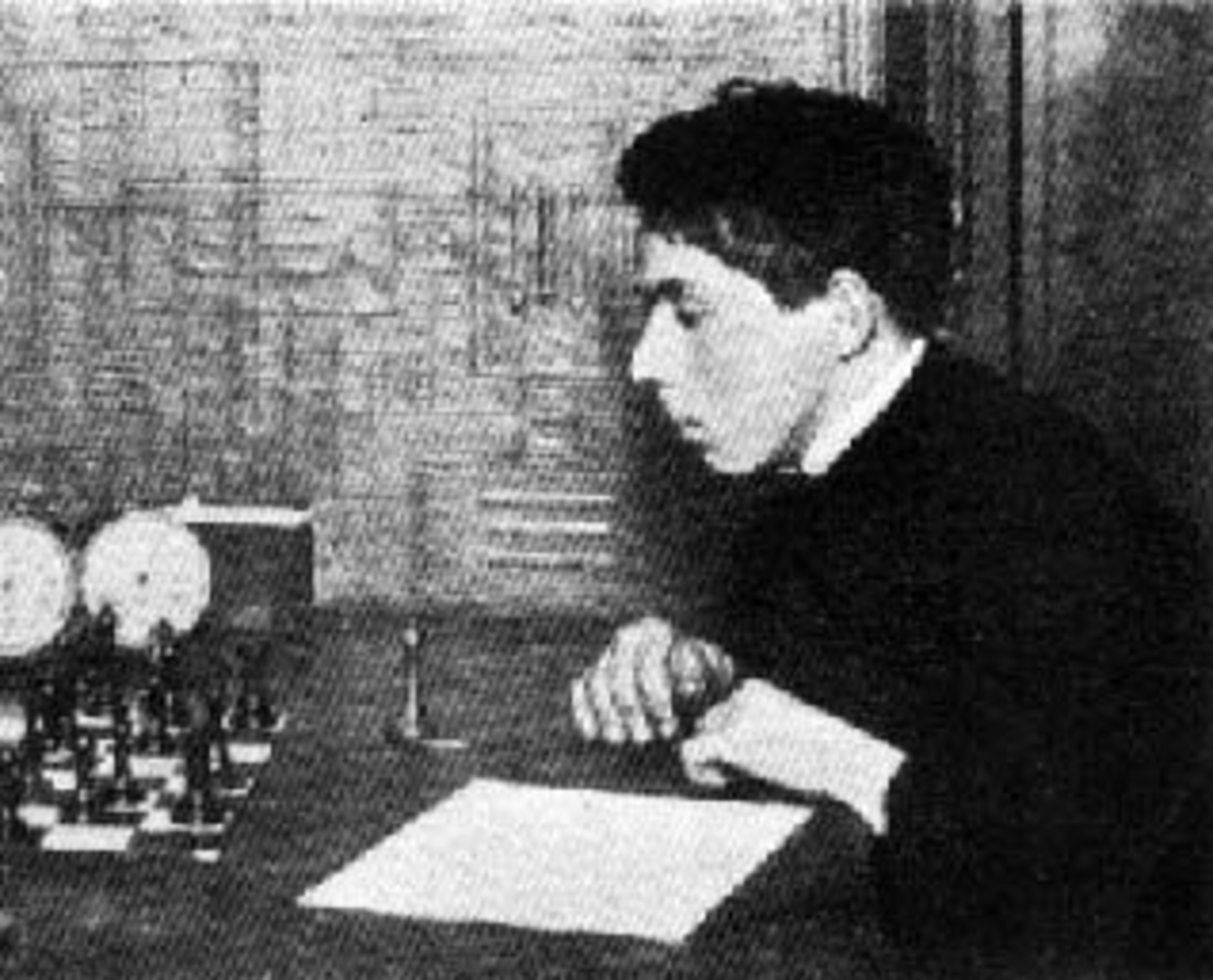 Romanovsky was one of the foremost figures in the development of chess in the Soviet Union. He is almost unknown in the chess community excluding the chess historians. As the games from his major events are easily found, I would try to give a selection of lesser known ones with my own analysis.

Peter Romanovsky was born in St. Petersburg in 1892, into a chess playing family – two elder brothers both being strong players. His tournament career extends from 1908 through to beyond the end of WW2. In 1914 he took part in the Hauptturnier at the Mannheim tournament which was interrupted by the outbreak of WW1. His career in the Soviet Championships started with the first one – on which more later, we saw him become champion in 1923, second in 1924, and joint champion with Bohatirchuk in 1927. There is a story to tell about the 1927 event. Romanovsky was awarded the International Master title in 1951. The Soviet Chess Federation intended to apply for the Grandmaster title on his behalf, on the basis of the 1927 championship. However, the application was not put forward, because it was realised that this would mean that Bohatirchuk might also be awarded the title. You guys might mistaken him for Adolf Hitler but he is really the chess player, “Fedir Bohatyrchuk”

In international events, he took part in two of the great Moscow tournaments of the period – in 1925 and 1935.
Amidst these occasions, in 1934, (1935 as per a few sources) he became the first chessplayer to be granted the Soviet title of ‘Regarded Master of Sport’, following his shared runner up (with Riumin) at the Leningrad competition, behind Botvinnik, yet in front of Euwe. As to Botvinnik, it has been said that Botvinnik respected Romanovsky, alongside Grigory Levenfish, as one of those individuals from ‘the old guard’ who was straightforwardly adversarial towards him. That is potentially valid. Botvinnik was supported by the then head of Soviet chess, Nikolai Krylenko, who had taken the situation from one of ‘the old guard’, Alexander Ilyin-Genevsky. As a feature of Krylenko’s program for the improvement and promotion of chess, the likes of Romanovsky, Levenfish, and Duz-Khotimirsky had to fulfil the role of educators. This included going to any place they were sent, giving talks, concurrent presentations, instructing, etc. Romanovsky was transparently incredulous of Botvinnik’s inability to dominate his game with Salo Flohr, to which Botvinnik reacted by alluding to Romanovsky’s devastating misfortune to Bogolyubov in 1924. Young Peter Romanovsky at the board

As part of his role as an educator, Romanovsky wrote two books on the middle game that are considered to be of great value. They have since been translated into English in various forms, most recently as a single volume under the title Soviet Middlegame technique, I believe. He was also a regular contributor to the Soviet chess magazines. In 1951 he was awarded the title of ‘International Arbiter’ by FIDE, along with his International master title as discussed. He was also a member of numerous organisational and administrative committees within U.S.S.R. chess, including being a member of the Presidium of the U.S.S.R Chess Federation. During W.W.2, he was a victim of the horror known as ‘The Siege of Leningrad‘. When he was found by a rescue party, his wife and family, along with his housekeeper, had died of cold and starvation. It is reported that there was no furniture left in the house – it had all been used as firewood. Very sad indeed! The Seige of Leningrad. A horrendous event in history

Romanovsky died in Moscow on March 1st 1964. He contributed a great deal to chess, particularly as one of that group of players who were instrumental in building the great Soviet chess powerhouse, played many wonderful games and deserves to be remembered. What is now regarded as the first Soviet Chess Championship was originally conceived as part of a larger event – The All-Russian Sports Olympiad. Whilst the economic situation meant that the Olympiad itself was scrapped, the chess event, under the organisation of the Vsevobuch under Ilyin-Genevski and Russo, went ahead. It was to be a strange and unique event, scheduled to begin on October 1st, 1920. Given the situation of the time, organising the event required what Ilyin-Genevski later described as ‘a military mobilisation of chess players‘. In effect, players were conscripted to take part. Local authorities were empowered to use the Red Army’s resources to locate players and arrange for them to be sent to Moscow, where they were to be billeted in army training quarters.

Romanovsky, who was employed in the Soviet Bank of Petrograd ( St. Petersburg) gives the following account of his personal experience. His invitation read:-

Due to the extremely great importance attached to the development of chess playing in Russia as an inherent constituent part of the obligatory preparation of working people for future military service, the Main Directorate of Vsevobuch organises from October 1st through October 25th (1920) in the city of Moscow the All-Russian Chess Olympiad as a festival to demonstrate the refined creativity of the mind. For the success of the Chess Olympiad, it is necessary to assure the participation of the strongest Russian chess players.

That is why the Main Directorate of Vsevobuch requires you to send on this mission P.A.Romanovskii, for him to be placed under our specific instructions for the time period from October 1st through October 25th of this year.
(Signed)
Commissar A. Il’in-Zhenevskii.

In Shakhmaty v SSSR, Oct 1950 he comments, ‘Am I really going to the All-Russian chess tournament? The country is in the fire of civil war, the invaders fiercely attack the young Soviet Republic’. I used this anecdote just to demonstrate the wild patriotism he had for his country as it would help you all to gain a better insight about him. However, this was not it. Other problems of financial nature quickly surfaced. Travelling expenses were not reimbursed, and the rumor spread that the promised prize money did not exist at all. After the fourth round the general dissatisfaction of the players reached a crisis point.

A group of players presented an ultimatum, refusing to continue to play unless their demands were met. The ultimatum reads.

Declaration of the Participants of the All-Russian Chess Olympiad.

In view of the significant deterioration in provisions, we consider it essential to declare that in the circumstances now prevailing, we are unable to continue the tournament and are obliged to break it off from Sunday, October 17th, in the event of the non-fulfilment (sic) of the following demands:
* The issue of an advance of 15,000 rubles per player.
* The immediate issue of the remaining cheese to the players.
* An increase in the bread ration, or compensation in some other form .
* The immediate issue of cigarettes.
(Signed)
P.Romanovskii, A.Kubbel, I.Rabinovich, I.Golubev, Ia.Danyushevskii, Mund, G.Levenfish.

Romanovsky’s second place finish earned him the Master title. Instead of the promised prize money, the three winners were awarded handwritten certificates and the choice of some items ‘confiscated’ from enemies of the state.

A game of Romanovsky’s from this event.

Let’s look at another game where he beat Master Freyman and immediately won first-catagory rating. He was then 16.

Just look at that roaring queen sacrifice which unleashed a king hunt and the final checkmate pattern. Incredible!

Ooh! What a game. Seems like Romanovsky felt for that Noah Ark Trap! How’s that possible? He just gives his bishop away to bring his knight further into his enemies camp and is eventually up a whole queen. Talwik HAD to resign.

A beautifully executed game where Romanovsky played postionally with all his pieces having lots of activity. That all stems from the bishop captures on f2 which is definitely an idea we all should keep in mind. Romanovsky was simply too strong. Shame that very few people know him!

The best move in this game exemplifies the “removing the defender tactic” . Queen to c2!! Remember this magic was all created over-the-board. Truly a tiger!

Another brilliancy! (I’m running out of adjectives …) What can I say? Romanovsky really understands chess deeply. He knows he has a better position, and stumbles upon the great idea of giving his queen for two rooks and a bishop pair. With his dark squared bishop on the board, there was little white could do. Impressive stuff!

And lastly, I want to finish off this article with a game that outlines Romanovsky’s positional play as well. Lisitsyn Georgy did play some inaccuracies and Romanovsky just used that for his victory. There were no bold, crazy sacrifices. Just good moves that win a game.

And just a last photo for you guys to enjoy from the Leningrad 4th USSR Championship (1925), Hope you’ve learned something new today. You can click the bell notifications on the bottom right corner of the screen to get notifications when I publish future articles.