Improvements to your Chess psychology

Psychology is a vital component of chess. To dominate a match one should be solid in chess, however in the mental sense too. Each chess player can remember moments when he/she was unable to recover from a horrendous misfortune (or draw) and continued losing in other rounds. Or on the other hand were amazed by a sudden twist in events and couldn’t change in accordance with it.

Before we sink in to the basic improvements to your chess psychology, it would be a disrespect not to add this particular moment where kasparov blundered mate in 1 and stalemated his opponent. That took a fatal hit on kasparov as we see through his facial expressions.

However what’s surprising is that most people think that it’s a game that is highly intellectual and is based on your intelligence and skill set. And I’m not denying that but they normally think that chess is either bad moves or good moves. But, they fail to account the huge role of psychology on chess.

The top chess masters and advanced players include this aspect in their training process as well. They practice under time pressure, play with a physical board and adopt other various techniques. Chess is a composition of critical positions and intense plays. When tournaments with a guaranteed prize fund of $1,000,000 are hosted ( such as millionaire chess), it is very easy to crackle under pressure. A chess player that wants to improve should study chess endgames, practice tactics and read chess theory but at the same time practice his psychology skills in real life situations. In chess, the two significant parts of psychology is:

1) Your perspective during the tournament

2) Your state of mind during a certain game

Before going forward, I would like to bring up something that most people occasionally do including you. If you have lost or failed to convert a completely won position and continue pestering yourself for it, there is a high possibility you will wind up in a difficult situation again and squander a great deal of apprehensive vitality en route. For instance, in the event that you are eager to strike back no matter what, you will scan the position more critically and in every move, your brain would be subconsciously scanning for fancy tactics and brilliant combinations and you would begin to play daringly as if you are white in an armageddon match. Or on the other hand you could get your psychological skill uncharged by stressing and lose because of absence of energy. And what’s even more astounding is that carlsen offered caruana a draw in a superior position with more time. That is a bit strange from carlsen and I believe psychology had a role in this. In the below tweet, garry kasparov shares his perspective on this.

In light of this shocking draw offer from Magnus in a superior position with more time, I reconsider my evaluation of him being the favorite in rapids. Tiebreaks require tremendous nerves and he seems to be losing his.

“In light of this shocking draw offer from Magnus in a superior position with more time, I reconsider my evaluation of him being the favorite in rapids. Tiebreaks require tremendous nerves and he seems to be losing his.” – Garry Kasparov. And yeah, as we’ve seen magnus is more strong in classical time formats. He is often weaker in lower time formats as we see his matches with alireza firouzja, a promising 16 year old who will take the throne one day. But that’s a topic for another day, let’s proceed.

Also I hope you understand how imperative it is to realize how to manage misfortunes and get out of this never-ending guilt loop. Attempt to get over it as quickly as time permits. Do a snappy goof check, fix your opening, and forget about it until the end. Take a decent rest and focus on the next game in the tournament. Recollect that every misfortune is only an exercise and remember the quote by Albert Einstein “Failure is a progress of success”. Learn to celebrate failure as much as victory. Remember that slip-ups are unavoidable, and the person who figures out how to keep his cool has higher odds of winning. In the event that you treat misfortunes along these lines, it will be simpler to deal with these blunders. After the competition, in any case, the first thing you must do immediately is investigate your games cautiously and decide your chess shortcomings so that to know on what to work later on. Note how I mentioned immediately. This is because all the analysis and thoughts you did during the game would linger around in your mind. You will remember it and would be able to pen it down on the analysis of your game and fix your thought process. I will cover this topic in great detail in the future. But the reason for mentioning it here is that you should go with the mindset that failure is alright and there is a learning from your failures which can be done from analyzing your games. Above all, you should feel sure at the board. I mean genuine certainty, focus, being certain you can play well, right stance, not some freaky “passing gazes” or “arm-grappler’s handshakes”. In the event that your rival feels you are faking it, he will turn out to be increasingly propelled to win and that drive would most likely cause him to win.

Also, never censure yourself for bumbles (“alright, I’m somewhat better now, however I would have won previously had I played 22 Ne6… “) during the game. Else you may turn out to be so fixated on it you will exacerbate the situation. Accept the game for what it’s worth, re-consider the assessment of the position and attempt to play on tranquilly, as though nothing sudden has occurred. Remember there is no such thing as perfect play, not even in the immortal games. After all, “Chess is the perfection of imperfection” – Yash Mehta.

Also remember to never resign or give up hope too soon and continue safeguarding sharply and constantly. A great deal of completely lost positions have been spared even against world class players. At the point when you are on the opposite side of this circumstance (for example winning), never unwind until the game score sheet is marked in support of you else you may see your flawless 1-0 transform into 1/2-1/2, or even into a monstrous 0-1. Remember, Overconfidence can ruin all the 40 good moves you have played. Ego is the biggest enemy in this game. Additional tips to add to your toolbox are given below:-

And the special last tip which I saved to the end because it’s both: the best improvement to one’s psychology and the most boring response. Practice. I cannot stress this enough. The only way you’ll experience the use of  psychology is by playing with more players. Particularly, higher rated players. They are usually better at defending and know when is the right time to attack. They’ll play 1. a3 (Anderssen’s opening, yes there’s an opening name for that as well) with a huge grin on your face that will already make you shiver. There will also be aggressive players who would keep sacrificing incorrectly yet they would keep you under the impression that you are losing terribly while it’s a +5 point advantage to you!

As a beginner and intermediate player, you need to experience the entire spectrum of chess players to develop and fine-tune your strategy against each of them. As you climb the rating ladder, there would be less of this players due to the era of computers and players playing solid, conventional chess. This will help you maintain your cool even when you climb the rating ladder and tackle advanced players. For that, signing up for your local chess club would be the best place to start off. You could also play in various tournaments and under time pressure to further develop your chess psychology and improve your chess instincts when you have lower time than your opponent. But remember, playing chess online on various sites has zero improvement with your chess psychology. You are facing a screen and your body doesn’t pick up your opponent’s body language, facial expression over a screen and since all chess computer engines can easily pass the Turing test, who knows you’re just playing against a weaker engine. Deep blue winning garry kasparov was the real tipping point and us humans realizing that now chess players would lean to engines for their preparation for almost everything: endgames, middlegames, puzzles, analysis. But the strong computers even fall to the greatest aspects of chess: pyschology. So this is one thing that surely should be practiced by every chess player as no matter how many preparations they do with modern strong engines, if they don’t repeatedly practice psychology then their efforts are simply futile. Hope I have convinced you to take this into consideration and include it in your preparation.

A short bonus tip for beginners, play every game seriously. Try to place stakes behind a chess game or a dare for the person who loses the game. This will bring the winner attitude in you which would greatly improve your psychology. You’ll thank me later.

These were the tips needed for improving your mental psychology and stifling the creativity of your adversary. 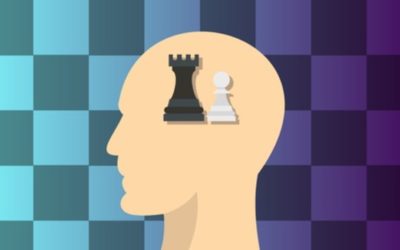 The power of Chess psychology

Hello Everyone, As we all know one of the most quintessential aspects of chess is psychology. This underrated factor...